Clear and Present Danger – We May Have Found the Source 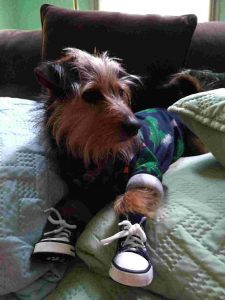 I realize this statement is quite bold. But let’s look at the evidence and what is reported as “evidence.“

In my conversation with regulators last week, I was informed that animals “multiply” bacteria; in fact, reportedly, enough cases of animals bacteria multiplying one million-fold in the pet are allegedly present that regulators feel the need to protect the public from any pet food product containing bacteria – one would think this should include pig ears. (One million-fold multiplication means one bacteria in the animal leads to one million out – presumably mouth to feces – a lot like a Petri dish in the laboratory. Thus the need for the biohazard suit.)

I’m not exactly sure of the link between recalled products and human infection. I am sure that I don’t kiss my fish nor do I dip my fingers in my fish tank before putting my fingers in my mouth; nor does my daughter (protecting children is a large part of the federal mission). I don’t feed pig ears (they do have a history of contamination), but if I did, they smell nasty – I wouldn’t let my dog lick me after he ate one of those!

Perhaps it’s the risk that children will eat these delectable treats? Although I’m pretty sure my daughter would avoid eating fish food and consider it to be “gross.“

By contrast, when an infant and crawling around on the floor, my daughter explored many things, including dog toys. If a pig ear or other “long lasting chew toy“ had been present on the floor, I’m sure it would’ve gone into her mouth – clear danger! Yet, no recall has occurred in the current situation.

I’m not understanding where the true, clear and present danger exists – raw pet food, which my daughter thinks smells gross and would never eat – or pigs ears stored and sold in bulk to consumers where children have free access in the store and at home?

I thought we were protecting human health?

Whose health are we protecting?

The manufacturer or the human consumer?

Let’s be fair – if fish food with zero links to human illness needs to be recalled, then let’s recall the pig ears which have a clear epidemiological link.

I guess the other option is to begin to train, educate?, the public of the risks of owning dogs and cats. We already know the risk of turtles. Apparently, dogs and cats are such amazing bacterial replicators that they should be in biohazard suits and come with safety warnings, much like the turtle.

Remember the John Travolta movie “The Boy in The Plastic Bubble”? The way these reports read, it must be time to put our pets in bubbles. No more kissing. No more petting. No more sleeping in the bed. You are taking your life into your own hands when you own a pet; clearly the risk is great. At least that’s what the recall notices make it sound like!

Tired of unfair regulations? Join Next Gen PFMA so we have a stronger voice with regulators.

UPDATE: In a backdated announcement, pig ears have now been recalled, although the title of the recall states it is a consumer advisory and as of 8:59 am on 7/5/2019 the recall is not listed on the FDA recall notice website, nor have I received a recall notice. (I, like so many of you, am signed up to automatically receive the FDA’s recall updates.) The danger must be escalating!

Previous The Way It’s Always Been Done
Next Game On!